More of an end of year wrap up, but I thought I’d revive my reading list blogs. If nothing else, perhaps it might encourage others to READ MORE. Here is a list of the books I’ve read this year plus the few stragglers from 2019 and a short opinion of each book. No particular order (I’ll try to follow the order in the photo). 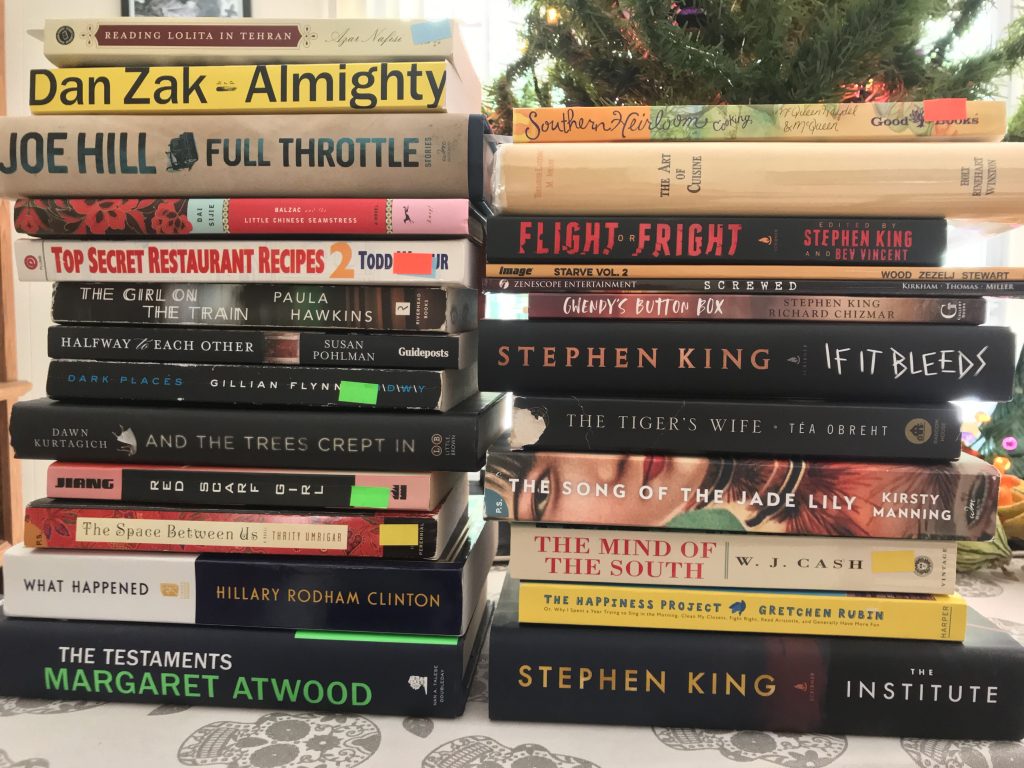 The Lacuna, B Kingsolver. (not pictured) Historical fiction covering the 30s – 50s in Mexico and America. EXCELLENT READ. The main character is a man who has a Mexican mother and an American father and his life moving between the two countries and cultures. It is a timely read RIGHT NOW since it echoes our current history so disturbingly. The first part of the book centers on the main character’s (Harrison Shepherd) life in Mexico. It is very interesting because he ends up being a cook for Diego Rivera and Frida Kahlo! So the reader gets a LOT of historical information about these two artists as well as Mexico during the Communist era in the 40s. The Riveras were close friends of the Trotskys and Shepherd is portrayed as Trotsky’s typist as well as the household cook. Then Shepherd returns to the US to be a writer and settles in Asheville NC. Kingsolver intersperses a little Appalachian history in this section, which is interesting. Then as the story moves towards the 50s, it explores the McCarthy era of accusing everyone of being a Communist. VERY jarring to see the clear correlations of that era and NOW. It’s like T**** took the historical records of that time and just replayed them. Those who do not learn from history are doomed to repeat it. TRUER WORDS were never spoken. The old white men who are currently fucking up this country are same ones who REMEMBER the McCarthy era and are using it as a template. I HIGHLY recommend this book – especially for Americans. Sometimes you need to be reminded that bad things have happened and they will happen again without vigilance.

The Aviator’s Wife, M Benjamin. I’m about halfway through this one. It is historical fiction revolving around Anne Morrow, the wife of Charles Lindbergh. It’s a good read; the characters are strong and the pace is decent.

Reading Lolita in Tehran, A Nafisi. This book is excellent. It begins with Dr Nafisi describing her underground reading group for females from her classes at Uni. Which is fine, it’s mildly interesting. She also gives a lot of literary analysis of various books such as Lolita, etc. BUT about halfway through, she goes into full memoir and describes Iran before and during the Islamic takeover. This is very eye opening and VERY RELEVANT to the bullshit we’ve just seen in the US. We are much closer to a religious regime here than most would like to admit. She also describes the war with Iraq, which was eight years long. Then Dr Nafisi circles back to her group of women and shares more of their stories. The best part of the book is definitely the memories of Iran pre-Ayatollah. Overall, this book is sad and about loss – of friends, of liberty, of her country. Dr Nafisi finally leaves Iran with her family to come to the US after enduring 17 years of Islamic rule in Iran. I think every American should read it and see that YES the unthinkable CAN happen. Iranians really did not realise that the Republic of Islam was taking over. It’s the frog in the pot scenario, which is also happening here. We may have beaten back the hillbillies THIS YEAR, but they are here to stay and we should NOT forget about their hateful desire to control this country and everyone in it. Sharia laws are not just for Islam, you know.

Balzac and the Little Chinese Seamstress, D Sijie. Historical fiction novella. It’s about two boys sent for “reeducation” during the Chinese Revolution. An engaging, short read in which you’ll learn something about the Chinese Cultural Revolution. Recommend.

The Girl on the Train, P Hawkins. I saw the movie a while back and thought I’d read the novel to compare. The novel is SO much better, of course. It delves deeply into the protagonist’s alcoholism. It’s also in an English setting. Very good read.

Halfway to Each Other, S Pohlman. I picked this one up because it’s about a family who moves to Italy for a year and I thought I might glean some info about doing that. Eh, not so much. It’s a memoir of a rich uber Christian family who takes a year OFF and goes to Italy. They are quintessential asshole Americans who barge into Italy without bothering to learn a single word of Italian. Ugh. I learned that Italy is pretty lax with their immigration documents, tho, which I already knew. It was not really worth the read.

Dark Places, G Flynn. Yes, this is the author of Sharp Objects, which was a mini series that blazed with Amy Adams and Patricia Clarkson, and Gone Girl, another good movie AND book. I’ve not read Sharp Objects yet, it’s in the stack. Anyway, this is Flynn’s third book and it’s a great character study, but a bit slow. It’s a decent read.

And the Trees Crept In, D Curtagich. This is a YA novel to the core. The most interesting thing about it is the unique typesetting. Otherwise, it is slow and repetitive. Read if you like YA.

Red Scarf Girl, L Jiang. This is a memoir from the Chinese Cultural Revolution, written by a woman who lived it. It is stark and very sad. The brainwashing of young people during the Revolution was really horrible. Read if you want to learn about how countries can be taken over by fascists. A cautionary tale.

The Space Between Us, T Umrigar. This is a memoir about growing up in India when the castes were very much enforced. The woman who wrote this grew up when the caste system was being dismantled, so her views were different than her parents and family. Interesting if you like learning about other cultures, as I do.

What Happened, H R Clinton. I read Hillary’s memoir Hard Choices and I enjoy her style of writing. This is about the loss in 2016 and I found it to be heartbreakingly honest and infuriating as well. Everyone should read this book. She does not pull punches about how she was treated, nor about the mistakes she made in the campaign. Highly recommend.

The Book of Gutsy Women, H R Clinton & C Clinton. (not pictured) This is a collection of women chosen by Hillary and Chelsea as examples of strong, brave women throughout history. They each chime in on how that particular woman helped shape who they are. I have to say, my respect for Hillary (and Chelsea, too) has grown immensely since reading her books. Highly recommend.

The Testaments, M Atwood. The wrap up of the Handmaid’s Tale and the fall of Gilead. It was ok. I dunno, since we’re living a nascent Gilead right now, it didn’t do much for me. It’s good to have an ending to the saga, tho. Which is sort of the issue I have with the show of the same name. They need to wrap it up, June has already done WAY more than I think would be possible under a regime such as that. If you want an ending, read this book. It’s still Atwood, so the writing is excellent.

Southern Heirloom Cooking, N J M Haydel & H McQueen. Another fun little cookbook I picked up at Goodwill. I like to get anything with old Southern recipes in it. This is a family recipe collection and VERY familiar!

The Art of Cuisine, Toulouse-Latrec and M Joyant. YES, THAT Toulouse-Latrec! This is a cookbook he wrote in ’66 that was translated by Joyant in ’66. The copy I have is a first edition with library dust jacket. It is full of sketches and illustrations by Toulouse-Latrec, which I LOVE. The recipes? Eh, a bit weird for me. LOL They ate a lot of stews back then in France.

Flight or Fright, edited by S King and B Vincent. This is a collection of airplane related horror stories edited by Stephen King. These stories are from various authors. Entertaining!

Two graphic novels: Starve Vol 1&2, a chef based story that is suspiciously close to Bourdain. I liked it a lot!
Screwed, a fun romp with a Frankenstein feel.

If It Bleeds, S King. This is another short story collection from King. Excellent as always. He is a MASTER of the short story.

The Tiger’s Wife, T Obreht. A Chinese fictional novel written by an author originally from Belgrade. It is a first novel and very well written. She weaves a lovely tale with ancient legends and spirit animals.

Song of the Jade Lily, K Manning. This is a historical novel as well as contemporary. She weaves the story of her family (1939) with the current life of one of the main characters (2006). I love me some historical fiction and I loves me some Chinese history. Lovely book!

The Mind of the South, W J Cash. Abandoned. It was just too dated and dry for me.

The Happiness Project, G Rubin. Abandoned. It’s 2020 with a fucking pandemic. Just NO. Too pollyanna for the current times.

The Institute, S King. I’ve read a lot of King this year! This one links to Black House and Hearts in Atlantis via the children used as Breakers. King as his prolific, wonderful self.

Geisha, A Life, M Iwasaki. RE-READ. I have the updated paperback of this book, but forgot about it, so I got the first edition hardback again by accident. It’s a good read and a good memoir of being a geisha (geiko) in Kyoto during post-war Japan.