I’ve not had much to say about T**** and the election. It’s been said by, well, EVERYONE and I didn’t feel I had much to add. For straight up good info and commentary, I recommend Jim Wright (StoneKettle.com). This is more of an open letter to all hillbillies out there who are going to vote for that lying, cheating, misogynistic, racist, fascist piece of shit.

First, let me explain my definition of hillbilly. I grew up in hillbilly E TN, so I know the typical definition. MY definition is much wider and includes anyone anywhere who is militantly ignorant, backwards and generally hateful to any people that are not just like they are. So, pretty much that encompasses MAGAts and the whole of the wacked out conservative Christian right.

Now that we are all clear on my definition of hillbilly, let me tell you why I have such a high level of contempt for them. I got into it with my asshole hillbilly neighbor and he got seriously butthurt. The best way to piss off a hillbilly is to call them one! He planted his T**** sign in his yard in response to my Biden/Ossoff signs and I called him a hillbilly on FB. He then sent me a threatening text (“Who the fuck you calling hillbilly?”) so I promptly blocked him from my phone and all media. Then he got another T**** sign and put it facing our house right on the lot line. SO mature.

He then left Nick a whiny VM wanting to know why I was being so mean and if we could “fix this thing”. Nick texted him back, explaining – not apologizing for – our contempt for people who vote for that piece of trash and that if he (neighbor) wants to vote for more hate, division and fascism, he should expect some push back from the rest of us. All the hillbilly could say to that was “Oh, I guess we disagree.” CLASSIC. Yeah, no, we disagree about football, this is far beyond a disagreement.

Why is it that MAGAts cheer when T**** trashes people and they wear Fuck Your Feelings T shirts, but get totally butthurt and whiny when you turn it back on them?

I have NOTHING but contempt for anyone who STILL thinks that fatass moron is good for the US. Clearly you are militantly ignorant and don’t give a fuck about anyone but yourself. These are the things that you think are fine and dandy if you vote for four more years of this shit:

– Immigrants in cages, with babies taken from mothers and women being sterilized without their consent
– Police shooting black people while they sleep in their beds and get no punishment
– Police shooting black people for walking, standing, driving, whatever with no punishment
– LGBTQ+ rights being stripped
– Women’s control over their own bodies stripped (undoing Roe v Wade)
– Putting a hard core conservative Christian on the SCOTUS (Under His Eye)
– White supremacists being supported and called “good people”
– Gun toting teenagers who shoot people are held up as good examples
– Allowing the pandemic to continue on and on when the rest of the world is mostly done because they actually had leadership, unlike here
– National debt has increased by $6.6 TRILLION (with a T)

Graph of T**** debt compared to other presidents and the forecast: 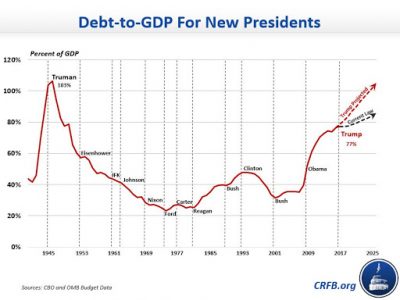 And SO MUCH MORE.

My contempt for hillbillies runs very deep. These are the people that supported Hitler’s Nazi regime. These are the people who will gleefully cheer as this country burns. They take pleasure from watching others suffer. They shit on everything good. They hate ME and ALL my friends, since none of us are “straight”. They don’t believe in science. They are fine with black people being shot in the fucking face for existing. They are fine with people in cages and forced sterilization. SOUND FAMILIAR? It should, this is Nazi Germany happening right in front of our faces. The Handmaid’s Tale is not far from happening if the crazed Christians like the SCOTUS nominee Amy C Barrett get control. Gilead is the goal of these crazy people. Do not doubt that. But hey, hillbillies, it’s FINE as long as the jackboot is on someone else’s neck, right? RIGHT?

So piss off, hillbillies. You are scum. I hope there are enough of us left to stop you from destroying the US. If not, I’ve got my passport, which I can hopefully use one day when the fucking pandemic calms down. T**** has fucked that up, too.

NONE of this is acceptable. I will call out the fucking hillbillies at every opportunity. And, hey, here’s a handy form for you to fill out if you feel butthurt about any of this (you’ll have to write in FB, this is an old form): 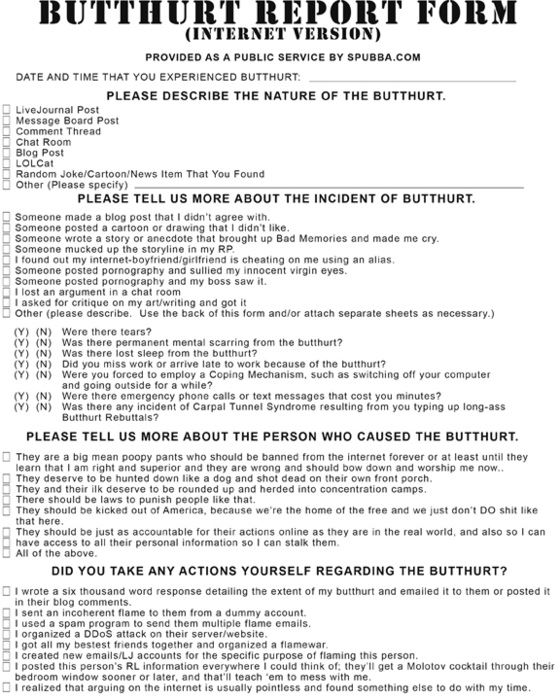