So there was a convo on FB that started off about how “Karen” ended up being the name all over the internet, from this definition:

WHAT DOES KAREN MEAN?
Karen is a mocking slang term for an entitled, obnoxious, middle-aged white woman. Especially as featured in memes, Karen is generally stereotyped as having a blonde bob haircut, asking to speak to retail and restaurant managers to voice complaints or make demands, and being a nagging, often divorced mother from Generation X.

Which steered the thread to a discussion about Gen X and how there seems to be different kinds of Gen Xers – to which I absolutely agree. I was not called a Karen, it was just the start of the discussion. Here’s what I said (slight edits for clarity):

As an elder Gen Xer (b 1965) raised by Silent Generation (b/t Depression and WWII) parents (NOT Boomers), I can tell you that there is ABSOLUTELY a schism in Gen Xers. There are ones like me, who were not precisely early adopters of the internet, but whole heartedly adopted in the mid 90s. BBS and chat rooms, OH MY! Those of us who got into tech in the 90s are VERY different animals than those who eschewed tech and lagged behind until FB made them feel like they “finally” understood the internet (LOL x 100).

The ONLY people I have contact with from my generation growing up are those who are technically adept. Why? Because those of us who kept up tend to be FAR FAR more knowledgeable about the world in general because we have used the internet for decades and understand how to do searches, how to spot FAKE shit and how to filter our shit to find the TRUTH.

Those of us who have been online since the 90s understand how to use the power of the internet to LEARN things and broaden our horizons. AND talk to people from EVERYWHERE. Those GenXers who went off to breed and had little to nothing to do with technology, were left behind in SO many ways. And the irritating part is that they can’t even understand how left behind they are. Hence so many of them being fucking MAGAts. They don’t even know how little they know. And by the gods, no one can tell them anything, either, because if it doesn’t line up with their ideals readily, then it MUST be that the internet (aka the whole world) is just trying to trick them. (Because the internet is big and scary!!)

I resent being put in the same category as the idiot GenXers who know nothing about that there internet or them there smart phones.

THAT IS NOT ME. Nor is it any of MY GenX friends.

There ARE two kinds of GenXers. Absolutely. The smart ones and the left behind ones – regardless of where they fall within the dates (1965-1980). I am old, yes, but I am a tech savvy NERD. FEAR ME, young ‘uns, I’ll dox the FUCK out of you. And: get off my fucking lawn. LOL :D

I feel I need to write a post about this debacle – even tho it’s in the second peak and (hopefully) decline. Covid-19 is a beast and a very nasty strain of flu/SARS. I’m not worried about getting it since I’ve got a VERY robust immune system, however, I might be a carrier. Who knows? There are no tests in this country, which is why 100,000 people are dead with more to come. No tests, no way to track, NOTHING. And things are opening back up. Bad idea.

Since March, we’ve been locked down. It is almost June. It sucks. I get that, but opening up now (as they did in 1918) will cause a huge second wave.

My catering stopped the first week in March. Nick’s job staggered on for a few weeks, then it stopped, too. We were very concerned about money, naturally, since we’d drained our backups for the bankruptcy. (At least the bankruptcy is going through and we are out from under the $60k business debts.)

We got the $1200/ea stimulus ($2400), which would cover us for about a month. The politicians thought this money would cover 10 weeks. LOL of course they did, rich fucks that they are. They think bread is 25¢ a loaf and rent is $150/mo because they’ve not paid a bill themselves in 60 years (they have accountants for that).

Luckily, Nick’s boss filed for his unemployment and he’s been getting that plus the $600/wk pandemic money. It’s all we’ve got. I applied for the “gig workers” PUA (Pandemic Unemployment Assistance), which has still yielded nothing.

Since this country is led by a moron and his hillbilly followers all think the pandemic is a hoax, the US has been hit harder than other countries. The MAGAts think that wearing a mask is unconstitutional and infringing on their rights, so the spread of Covid-19 is still going. Opening up businesses and public places is going to ramp up the victim count again, but hey, it’s just us peasants, right? It’s more important to let people do what they want, when they want, in any fashion they want than trying to stem the spread of Covid-19, right? Sure it is. Because 3% is acceptable losses to keep the stock market strong! Just ask the rich fuckers like the illustrious fucknut in chief.

I wear a mask when out to protect others, not myself. I have no idea if I am a carrier or not since there are no tests. I might be? Since I never get sick, I might’ve picked up Covid-19 and not had any symptoms. THAT is the problem with this strain of flu/SARS! It is very sneaky and very virulent if someone wins the shit lottery and gets it just the right way. Plenty of people have had it and survived – even Nick’s brother in law did, and he’s not in particularly excellent health. BUT many younger people who are healthy get it and die just out of shit luck. SO. It’s best to err on the side of caution.

This country is a shit show. It is led by an idiot. And that idiot will get re-elected by his legion of hillbillies. In the meantime, nothing is happening: no cons, no concerts, no movies, no sports, no large gatherings. BUT you can go swimming at the local pool and you can go shopping at Ross and nevermind wearing a mask, only losers do THAT. Yup. Merika.

And that’s all I have to say about the Pandemic. We’ll survive, but this shitty country may not. And I’m OK with that. We got passports and an exit strategy. 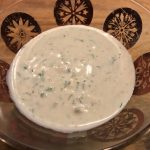 I love homemade dressings and this one is a melange of several different ones I make regularly. It has a creamy base - much like a herbed ranch dressing - with added crumbled feta. You can use this basic recipe for pretty much any combination of herbs, with or without feta. Enjoy!
Course Salad
Cuisine American
Keyword creamy salad dressing, feta salad dressing, herbed salad dressing, salad dressing
Prep Time 10 minutes
Servings 8 servings
Author misangela

This is a really great dressing base. Change it up to suit your tastes! Leave out the feta! Add double the herbs and blend for a Green Goddess dressing. Use lots of lime and cilantro for a Mexican inspired dressing. The sky's the limit!

Another update in my ongoing battle with GERD. Sigh.

While I am glad I’ve rid myself of PPI use, I can’t say that it’s been without its issues. I have bouts of GERD every single day, while awake and while asleep. I typically get a flare after eating (doesn’t matter what it is) and occasionally with wine.

I was using Pepcid, an H2 blocker with antacid (10mg famotidine) when GERD was really bad or it was flaring before bed – and it works GREAT! But. As usual, I have the terrible side effects of H2s – even with limited use. H2s give me terrible, debilitating constipation. It really makes me ill. Then, of course, I have to take things for THAT. UGH, it never ends. ::sob::

So, I have to forego all PPIs and H2s. I have aloe juice (gross), alkaline water (dunno if it helps or not? maybe?), TUMS (also has calcium which does not help with the bowel issues), probiotic supplement and some herbal tea to combat the flares.

I alternate what I take and hope for the best. I got some pricey Enzymedica shit from Sprouts today to see if it helps with the flares of GERD. It’d BETTER for $18!! Of course the shelf price was WRONG, as ALWAYS with fucking Sprouts (said $9, actual $18). That place is a scam. I only go there when I need something NOW and don’t want to wait for Vitacost (Kroger) delivery.

So, that’s where I am. Not great, but not dying. Just uncomfortable a lot and cranky even more. Again, not terribly unusual. #getoffmylawn ;)

It’s been about 5 days since my last dose of esomeprazole. I got myself a care package of aloe juice, alkaline water, stomach tea (with similar ingredients to the Ibrogast formula that is too pricey) and the Target brand of Pepcid (famotidine 10mg + antacids).

The day I got the supplements, I didn’t use anything at all and made it through the night. The next day was rougher, with more breakthrough GERD and I took the Pepcid before bed. The day after that, fine.

So it’s been very uneven as far as the breakthroughs are concerned, but overall, I’m doing pretty well without the PPI. I think I’m done. I am so relieved!

I take Tums for minor flares, aloe for worse ones and occasional Pepcid at night. I’ve taken a tums before bed a couple of times when I feel that there *might* be a GERD incident. So far, so good.

I’ll update again if there is any change, but I think this is probably where I’ll be from now on. I think I’ll always have some sort of GERD flaring up, simply because of the shape of VSG making the stomach basically a turkey baster that pushes acid up to the esophagus. No particular foods have any effect, nor does alcohol, it’s all very random. I’m hoping the volume of my Lil Tummy™ goes back to about a cup, but if it doesn’t, no big deal. I think the overall inflammation is getting better.

So, I’m living proof that you CAN get off of PPIs. From start to end it took me about 6 weeks. Perhaps 8. With the quarantine of Covid-19, my sense of time is a bit distorted. I think it’s about 8 all together. It was not too bad for the most part, I did lose some sleep here and there, but I have to say, it’s been easier overall than it has ever been in the past to stop the PPI. I think it’s because I did the stepdown slowly this time. The first step was a month or so, then the second and getting off was quicker. I actually feel that the half tab at night made things worse than just not taking it.

I hope this roadmap might help others who want to be off of PPIs before they find out they have kidney damage or other issues.