A friend posted about this Irritable Bowel Disease (IBD) diet and as I read the study, I recognised the diet immediately: it was very similar to the VSG diet I created for myself! I was surprised, but after thinking about it, it makes sense. You want to present food in the way that it will be best absorbed and with as many nutrients as possible. MY goals for post VSG surgery!

This is the study: An anti-inflammatory diet as treatment for inflammatory bowel disease: a case series report.

Here is part of the foods chart from the study. It is strikingly similar to my plan (click to embiggen, go to study to see the whole chart): 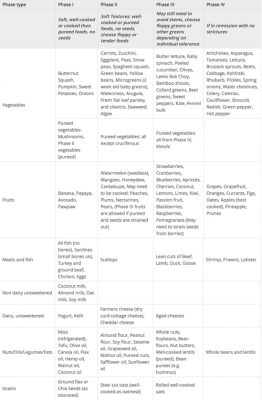 As you know, you start off with purees then progressively go towards “whole” foods that have not been ground, canned or otherwise altered. I went from purees to canned things like tuna and chicken, then to ground meats then to solid meats. I was on “regular” foods by around 2 months. I wrote all about that in my early posts.

I just thought I’d make a post about this to strengthen my assertion that you do not have to eat yogurt and canned meat for 3 months after VSG, as the Mexican nutritionist would suggest. I did give the info to her, in the hopes she might rethink her approach to VSG patient nutrition, but she probably won’t.

Anyway, I hope that this study’s findings and their method of getting the most nutrition into the body in the easiest way for the stomach and digestive tract is helpful to VSG patients who just want to eat something besides yogurt smoothies. Fruit and yogurt is not nutritionally dense enough, IMO. You need vitamins along with that protein to heal. Fruit is not vitamin dense, it’s just sugar, and canned meat is just fat. So if you’re doing VSG and don’t agree with the diet you’re given, look over this IBD plan and my recipes and make your own diet that suits your tastes. You’ll be happier and I promise it will not ruin your VSG healing – despite the drama you’ll hear from your nutritionist and team for going “off plan”. It’s my opinion that you’ll heal up faster when you are eating vitamin dense foods and lots of protein. I was on to regular foods at about 8 weeks, a few weeks faster than their plan and I feel that this is because I was eating a better diet, which got me healed up faster. As always, your mileage may vary. :)