Didn’t feel all that great this morning, so I knew the session would be painful. YUP.

She left everything in place for twice as long as usual.

I am still on the same Death Tea™, which is not too horrible at least.

After a hard session, I usually feel tired, as I do today. So I’m going to take it easy today, do some light cooking and just chill.

I really wish my body was as compliant as Nick’s. He’s already feeling better after 3 sessions. ::sob::

Alas, my body is as stubborn as my mind, so onward we go with treatment.

Since the previous session, I’ve been taking the new Death Tea™ as directed, but the GERD is back in force. Last week I had several days where every single thing I ingested caused a GERD spike and I was eating Tums by the handful. NOT GOOD.

At the first of this week, I was feeling depressed about the GERD resisting acupuncture and just not in a great space. But the GERD did ease off a little bit this week. You have to remember that when it’s spiking badly, it will wake me up twice every night as well, and I have to eat a Tums. Once a night is bad enough, but twice is pretty bad for sleep quality.

I am tired and feeling gross today, so I knew the acupuncture was going to suck. I almost didn’t go! And I was not surprised when almost every needle hurt. Being overly tired will often read as anxiety to Drs because, for me, my heart rate is elevated when I’m overtired. So she gave me two scalp and a third eye needles today – which did help me relax. The needles even hurt coming out today – which NEVER happens. :(

No cups today, but I did get seeds in the ears for acupressure! They look like this:

I also got a new Death Tea™, since the one she gave me was clearly not working. She said she’s changing tack and give me a more supportive tea rather than trying to take on my issues directly. She said that this tea will support my spleen and help bolster my “good energies”.

Next appointment is 3 wks, on a good luck Friday the 13th! I really hope this new tea works!

Today’s session is full of new and exciting things! I allowed electricity to be used and I had some cupping done! FOR SCIENCE!

I’d been having an odd thing happen for almost a week. I was getting a tingly/zingy feeling in my left hand going up the thumb and forefinger. I told Dr Li about this and she said, “Oh, yes, that is your colon meridian. It’s talking to you!” How cool is that? My body is actually TELLING ME what’s up!

Most of the work we’ve done so far has been the colon meridian. As Dr Li puts it, “Things need to move down. They are not moving down.” I would agree! Ever since VSG, my entrails have not worked right. With the PPI, I had diarrhea most of the time and when I stopped that, I have constipation most of the time. So, YEAH, things need to “move down”. AGREED.

Today she brought up the electricity again and I balked. She insisted that it is NOT like anything that touches the skin, because it does not touch the skin at all. I thought that I should give it a go myself to see how it is for SCIENCE. So I did. And, she is 100% correct: it is nothing like on the skin. At all. It just feels like a pulsation. I’d still say if you’re new to acupuncture, probably get used to the needles first, then move on to electricity. The reason she was keen to do it is because I’m not getting past these colon issues, and adding electricity to the acupuncture makes it MUCH more effective. We shall see, I guess. She told me that the electricity is used on the abdomen, but rarely the spine, due to the sensitivity of the spine. Makes sense. Here’s what it looks like: 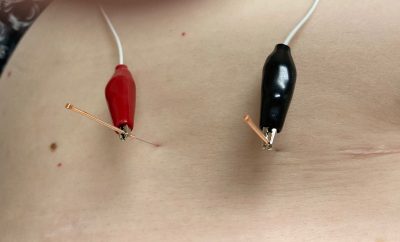 END_OF_DOCUMENT_TOKEN_TO_BE_REPLACED

The second session with Dr Li is in the bag. Different places were done today and a couple were twangy, but mostly imperceptible. Dr Li was happy with my innovative way to take the Death Tea™! (See previous post for how to brew, store and take the Death Tea™ with minimum assault on your tastebuds!)

Visit went the same way as last time. Had a couple in my wrists this time and a few more in my lower leg. Also had a couple in my legs on the back this time. My spine was less sensitive this time, which is a good sign. My body freaked out for the first 10 minutes, as usual, but calmed down. I am extremely sensitive to any fiddling with my body. I don’t like it in general and I avoid it as much as possible. But I think this modality is going to work for me, so I tolerate it.

Dr Li asked if she could do electricity with them and I declined. I am VERY averse to electrical charge. I tried the Violet Wand: NOPE; I tried it with a facial: NOPE. She was fine with my refusal. My skin is uber sensitive to anything electric, I’d advise caution with the electricity if the needles are painful to you or you are new to acupuncture, I’d skip it.

Here are a couple of shots of me with all the needles in place. I’ve linked to the large version of the photos since the needles are so fine they are hard to see without zooming in. The needles are VERY fine, smaller than a pore, and they leave no trace. I also found out today that there are different lengths for different areas of the body, which makes sense, the wrist has much less flesh than the stomach or the leg. I’ll try to get a shot of them next time.

OK, I have four in abdomen, one in each wrist (inside), two on each leg, and two in each foot (I think). See if you can see them: 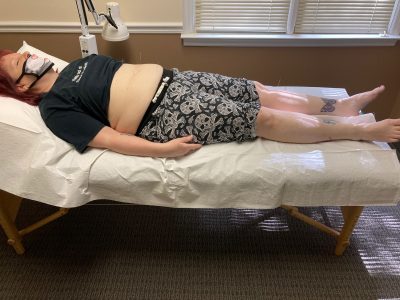 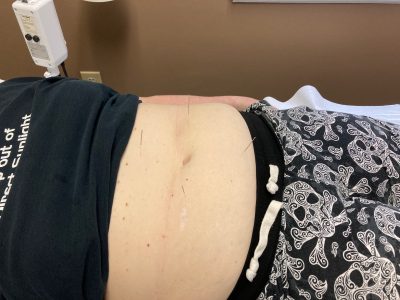 The needles are SO tiny! Yet I can feel the Qi being stimulated. I am also feeling results even with just two visits. My usage of Tums during the day has already dropped and Lil Tummy is feeling more robust and less bitchy. Of course, if I drink a lot, I know I’ll pay for it for a day or two, and I’m OK with that. But in general, I am starting to see some improvement. I hope it continues!

If you’ve ever considered acupuncture, I’d say give it a try. Find a Chinese Dr and go for it. It is worth a shot, particularly if nothing else has worked.

I have taken my own advice and started getting acupuncture for my GERD. These will be in the bariatric section of this blog since my GERD is caused by VSG and also under Health.

I’ve had the first appointment and it went very well. Not very painful at all. I could feel a couple of the needles, but in a zingy kind of way, not a hurty kind of way. I can’t explain it any better than that. The needles are tapping into your energy meridians in order to stimulate Qi, so if you think of these meridians as electrical circuits, you can imaging what a zingy feeling could be like. It’s interesting.

Dr Jiang Li is an AMAZING Chinese doctor here in Atlanta whom I HIGHLY recommend if you have ever wanted to explore Traditional Chinese Medicine (TCM) and acupuncture. I saw her years ago for compressed disks cause by some asshole “trainer” who had zero clue what he was doing. The acupuncture session then was terribly painful the first time and somewhat better the second, but my back was completely better in just a few days. Read about the first session here and the second here – I am very specific with needle placement for the second session, so read it for info! (I have no idea why I stopped going after only two sessions, but it is SO like me to do that. Sigh.) This time is VERY different!

Anyway, I’ve been recommending Dr Li to people forever and it suddenly occurred to me that I should take my own advice and seek alternative treatment for this damned GERD. So here we are. END_OF_DOCUMENT_TOKEN_TO_BE_REPLACED