This post was spurred by this Salon article from 2013. 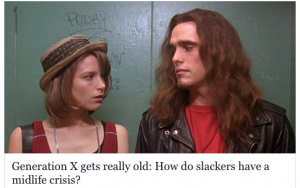 It’s Salon, which means it’s not reliable as a news source, but this article feels pretty spot on to me:

“The Xer in midlife is facing the opposite midlife than the Silent Generation,” Howe says. “The Silent experienced claustrophobia. Xers experience agoraphobia — everything is possible.” – Neil Howe quoted in Salon article “Generation X gets really old: How do slackers have a midlife crisis?”

I do not feel like the dude in Falling Down. I do feel agoraphobic. I feel like I’ve been let down by the “American Dream” touted by my parents. They would tell me “you can do anything you want!” then ridicule my college degree and advise me to get an office job when I kept changing “careers” to try to make the best of what I had. I feel resentment at them for still spouting that bullshit at me, EVEN AS THEY GO INTO THEIR LAST YEARS BROKE AS FUCK from refusing to change. They were in the building business and they got crushed. My brother now has a shitty county job that pays less than $30k/yr and he supports ALL of them. He sat around for 4 years spending their savings before he got a clue that he might have to find a new career. My parents fought him all the way. This is my brother all right:

“Studies reveal that a disproportionate number of us are sandwiched between dependent children and aging parents – fending off economic stressers while juggling a heavy load of family responsibilities.”

My brother supports his clueless 17 year old pregnant daughter and two sickly parents. He’ll be supporting his grandkid, too. He feels trapped and he is. But it’s his own fault for allowing our overbearing mother to run his life. I really wonder what will happen when she’s not around to tell him what to do. My brother will be 47 in January and he’s never had an independent life. I couldn’t save him, though I tried very hard. They all resent me because I saw the trap and I fled. None of them were smart enough to do that, so naturally I’m the bad guy.

My parents tell me that it’s MY FAULT that my $100k home became worth $40k. THEY ARE FULL OF SHIT. And out of touch. My father actually said, “There wasn’t a housing bust! I don’t know what you’re talking about! You’re lying! Houses are selling great in Knoxville!” Uh, right Dad, I made the whole thing up and Knoxville fucking TN is immune to the ills of the WHOLE GODDAM COUNTRY and you lost all your retirement money to invisible gnomes. Right. He probably thinks this because he has lived his whole life in a 10 mile radius. They all have. Small towns, small minds. It’s amazing how real their fantasy world is to them. They must work really hard to ignore the news that is on their TVs that are on 24/7. This is why I call them militantly ignorant. It’s hard work to ignore reality like they do.

I have had to start over in my life. And over. And over. I’ve been fucked by the Boomer’s “American Dream”. I went to college. I settled down and bought a house (Nick did this, too). What did we get? BANKRUPTCY. We bankrupted and started fresh three years ago – but we paid off our fucking student loans, at least. It was the best thing we’ve ever done – despite my fucking family telling us we’re losers for not sticking with a failed investment that was killing us with stress. Despite my father (who has always been an entrepreneur) telling me I’m crazy to start up a business and I’m doomed to failure (arcade pub for those new to this blog), that is precisely what I’m going to do. I’ll succeed to spite him.  The last paragraph of the Salon article really does sum it up:

“If we’re going to make the country a better place, more suited to our values, we need to do it ourselves. Middle age is, if nothing else, time to shift out of second gear. If we can’t take a break from the urban farms, put down the knitting and home brewing equipment, and step into politics, business and other kinds of leadership, we’ll deserve our reputation as the generation that never quite showed up. Rather than the sound of silence, we should be hearing our voices – and they should be loud and angry.”

The Boomers are clueless about who we Xers are and the constant stream of CRAP that we’ve dealt with. But I think we can become the leaders we need to be on our own terms. I think if more of us would take chances, we could get something done. There’s no one left to take chances but US. The Millennials are certainly not ready. We’ve got to stop playing it safe and get out there. It’s hard to do, I can attest to that. The fear of failure is real. But when it comes down to it, we have no choice. It’s start over again or live in a box under the interstate. Nick’s Boomer era job is ending. We must reinvent. If there’s anything that Xers are good at, it’s THAT.